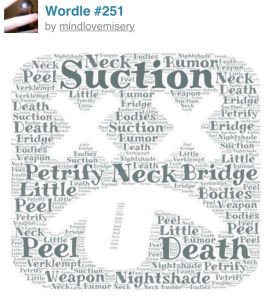 The professor peeled the nightshade over the glass, darkening the classroom. He did not want to petrify his students, but thought to bridge their bodies from lack of interest to a state of uneasiness. Until now, they did not take this class seriously, but after tonight, he was sure their attitude would improve. The rumor around the campus was that Professor Jones’ class was an easy A and he was determined to dispel that idea.

“A little death never hurt anyone, except for the victim” he began, brandishing a sleek metal weapon in the air. He quickly had the complete attention of everyone in the room. Starting to nervously wiggle in their desks, eyes quickly scanning from each other and back to the professor, one female grabbed her neck as if she was choking. Apparently the sudden sight of the knife caused her to swallow her chewing gum and it stuck in her throat. The professor quickly aided her with the heimlich maneuver to suction the wad of gum out of her throat.

The class was verklempt at the entire scene and Professor Jones stepped to the window opening the shades. The room flooded with moonlight and cast an eerie glow on his face. His idea was a success–no one thought his class was easy after that night, even though he was put on indefinite leave the next day.