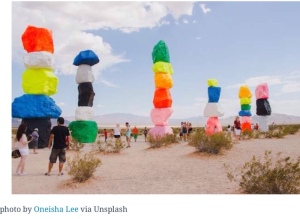 The Kansas countryside crowds were getting larger. People from all over the world were coming to see the phenomena. Questions abound as to what these colorful objects were, how they came to be and where they came from.

Peter Pinklestein led the scientific expedition, being the first knowledgeable person to see these sculptures, had theories of his own. He explained the hardened objects probably froze, melted entering earth’s atmosphere, and then achieved the soft metal state they were currently in.

Meanwhile in a galaxy far away, two giant alien boys were carelessly tossing into the chunks of chewed bubblegum into the atmosphere.